5 Applications of PEEK Coatings that You Should Know

Some types of coatings are so familiar that even laymen recognize them and can list some of their uses. For example, PTFE (aka Teflon) has so entered popular parlance that pundits have used it to describe particularly resilient politicians. (“She’s so likable that nothing sticks to her, just like Teflon.”) However, other sorts of coatings have gotten less press, so to speak, even though they provide equally valuable benefits. One of those is polyether ether ketone — also known as PEEK.

In this article, we will explain exactly what PEEK is, the benefits and properties of PEEK, and five different industries that can benefit from its use.

Originally developed in 1978, PEEK wasn’t introduced to industrial coating customers until the early 2000s. A member of the polyaryletherketone (PAEK) family, PEEK is a semi-crystalline thermoplastic created by the polymerization of specific kinds of potassium salts. Materials database Matmatch explains, “A number of labs were only able to produce a version of PEEK that was low in molecular weight due to its crystallization and precipitation from solution. It wasn’t until later that a company now known as Victrex changed the conventional solvent to one that had a high boiling temperature (closer to PEEK’s melting point) such as diphenyl sulfone, and PEEK with a high molecular weight was produced.”

What characteristics did this new material display? Well, PEEK begins its glass transition process at approximately 143 °C (289 °F) and only starts to melt at 343 °C (662 °F). Indeed, it typically doesn’t begin to break down when exposed to heat until it reaches that aforementioned melting point. Technical literature usually lists its operating temperature up to an impressive 260 °C (500 °F).

As for its physical characteristics, the finished PEEK compound retains a smooth, uniform surface that resists marring and scratching. PEEK remains tough even when placed under continuous mechanical stress and compression, resisting cuts, deformation, wear, particulation, and sloughing. It also won’t absorb moisture from exposure to water, humidity, or steam.

PEEK stands up extremely well to various kinds of environmental exposure. It’s will not react with many kinds of chemicals, including most common acids, bases, salts, and hydrocarbons (e.g., petroleum, natural gas). However, PEEK will dissolve in room-temperature sulfuric acid, but it typically takes a long time to do so for all but the material’s thinnest forms. Different kinds of PEEK also won’t become brittle when exposed to gamma radiation, and all forms of the material don’t conduct electricity and won’t degrade when exposed to biological material. This is why specific grades of PEEK material have gained FDA approval.

Speaking of regulatory approvals, PEEK gives off limited amounts of gas when created and processed, meaning it poses little contamination risk. In fact, most of its grades comply with the European Restriction of Hazardous Substances Directive, granting it wide international appeal.

All of these elements make PEEK one of the most robust thermoplastics on the market today. Despite the benefits of PEEK application and usage, you can find several disadvantages of PEEK. For example, PEEK requires very specific temperatures to properly process, and any change during its formation can lead to warping. Perhaps that’s why it’s fairly expensive for both its raw materials and as a finished product. Finally, PEEK can degrade when exposed to UV radiation, chlorine, and sulfur.

It’s easy to see why PEEK coatings and other applications are becoming increasingly popular. In the following sections, we will explain various PEEK material uses across different industries. 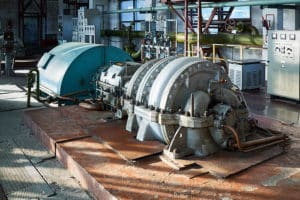 It’s a given that one of the most inhospitable places on the planet is the inside of a nuclear reactor. In addition to creating nuclear chain reactions that produce large amounts of gamma radiation, they also produce incredible amounts of heat. And if there’s anything you don’t want to exposure the wider world to, it’s the byproducts of the nuclear-power process. Fortunately, PEEK can easily tolerate exposure to heat, water, steam, and radiation, which is why it has found regular use in nuclear environments. PEEK is found in the following nuclear power plant components:

Similarly, oil drilling and geothermal-well production are delicate processes, and equipment failures can lead to environmental damage, production delays, and loss of life. No wonder, then, that PEEK is regularly used in these environments where exposure to petrochemicals, steam, and heat are all common. PEEK won’t degrade when exposed to water or hydrogen sulfide, both of which happen regularly in this industry, and it holds up to mechanical strain and resists impact damage, an essential characteristic in downhole areas. It also won’t expand when heated. PEEK is typically used in seals, insulation, electrical connectors, and as a reinforcing material.

Because of its general resistance to reactivity, PEEK is an ideal material for businesses in the chemical industries sector. Whether it involves producing chemicals for life sciences, storing and transporting chemicals, or using substances for the creation of consumer products, PEEK finds applications in seals, linings, valve seats, insulation, and pump impellers.

In addition to the risks posed by exposure to various substances that might damage or degrade more traditional materials, PEEK can withstand great pressures associated with various kinds of pumping applications. Components such as high-pressure valves, valve plates, sealing plates, and compressor rings get made out of PEEK for high-pressure applications.

One obvious advantage of PEEK in food-processing end-use scenarios is that it won’t react with biological material, a fact that has caused the FDA to give its seal of approval to multiple grades of the material. The fact that it stands up to high heat also offers benefits for food-processing workflows that require it (e.g., thermal sterilization). Another benefit involves the material’s robustness under working conditions, which is why it appears in filling nozzles, scrapers, valves, mixing paddles, and brushings. Finally, PEEK makes an appearance in surfaces that need regular cleaning due to its ability to stand up to potent chemical cleaners.

Of course, these represent only a selection of the available applications for PEEK.  Orion Industries can help you with your PEEK coating projects across a variety of applications. Our customers compliment us for meeting or exceeding their timeline needs and for the superior quality of our coatings and application services. Contact us today to request an engineering consultation with an Orion technical consultant.